As with most operating systems you will probably want to install some additional applications, or potentially remove some of the defaults that you don't find particularly useful. Fortunately software management in Peppermint is rather simple in that we have multiple methods of accomplishing this.

Software in Peppermint comes in the form of Debian software packages which carry the .deb file extension. These packages contain a complex dependency structure implemented in such a way that the user should never have to worry about anything while installing.

The preferred method of installing and removing software in Peppermint is by use of the Software Manager. This application was developed in house at Linux Mint specifically to offer a simple and intuitive means of managing software packages. 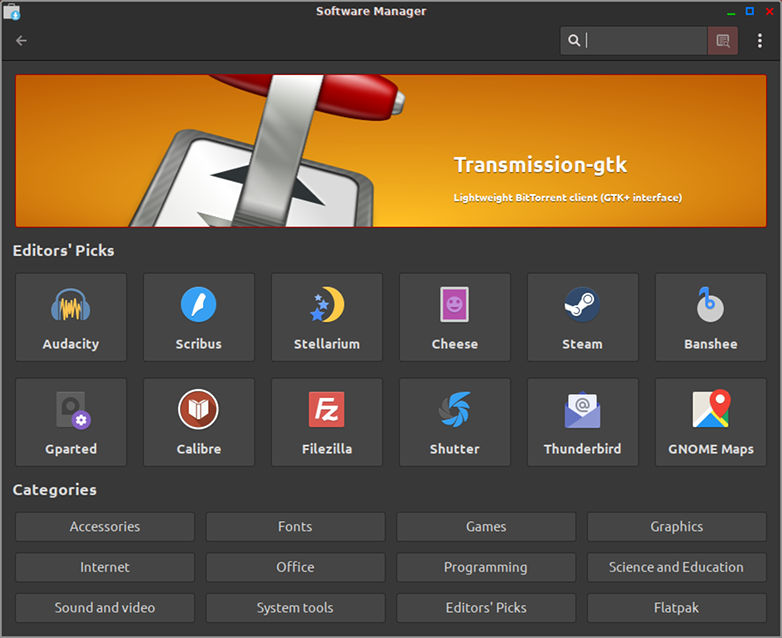 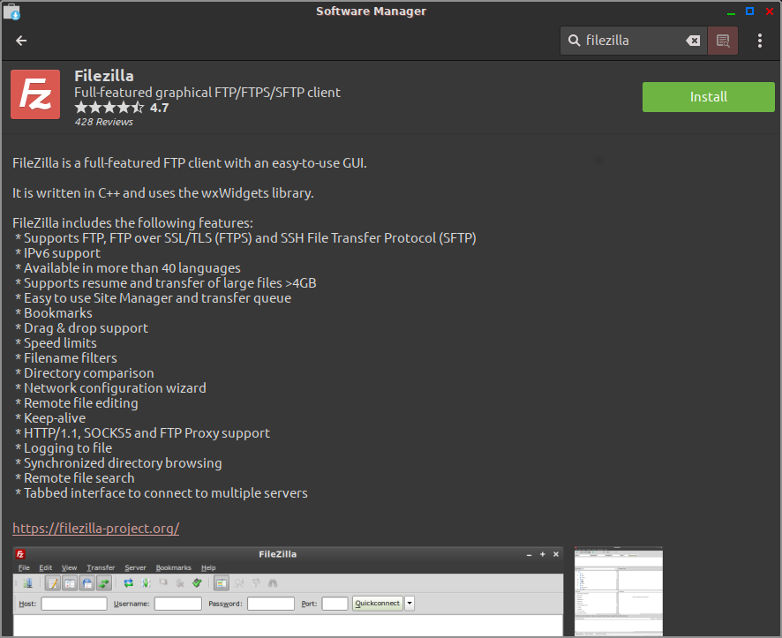 If you're looking for something that's a little more technical in nature than the Software Manager, the Synaptic Package Manager should fit the bill nicely. Synaptic can be easily be found in the "System Tools" section of the menu. Synaptic makes very few compromises in the way of simplifying software installation the way the Software Manager does. As such it's often the preferred graphical tool for veteran users and power users on systems where it is available. While using Synaptic, be prepared to have a good idea of exactly what you're searching for as it is less discriminating about such things than the Software Manager. 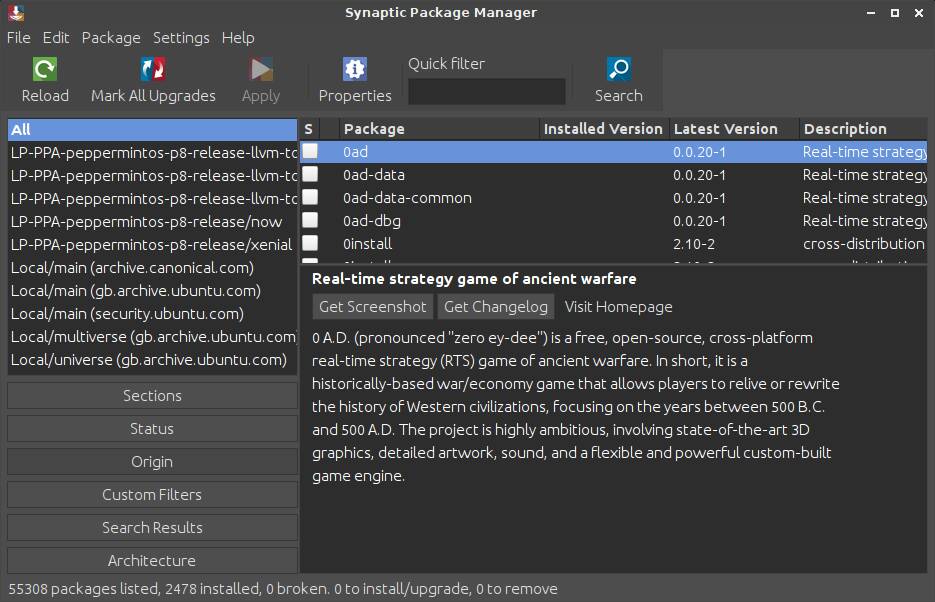 Synaptic functions by having the user mark packages that they wish to install, upgrade, or remove. After all the changes you wish to make are marked, simply click on the "Apply" button. From here you will be prompted with a confirmation window that provides drop down menus which break down all of the changes to be made, including any dependencies that are necessary for the software you are installing. Clicking "Apply" in this window will confirm the changes and Synaptic will go ahead with the process.

So what happens if you download a software package that isn't available in the Software Manager or in Synaptic? Fortunately there's a tool specifically for this job called GDebi, and it's very easy to use. Double-clicking on a downloaded software package in the file manager will launch GDebi and it'll present you with a simple, yet intuitive interface to work with. In this example I'll be installing the stable build of Google's Chrome web browser. 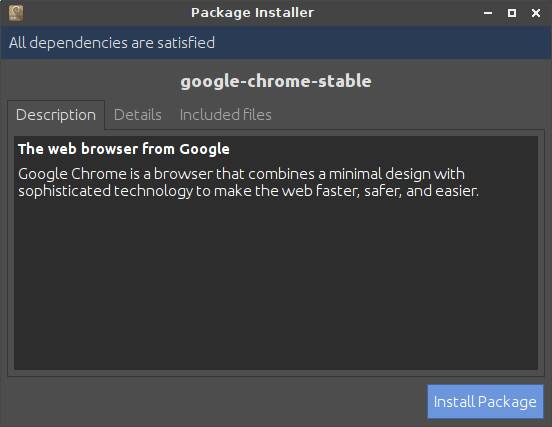 Unlike the Software Manager and Synaptic, GDebi does not automatically handle dependencies for you. If a software package requires other packages to be installed first, it will let you know but you'll need to find alternate means of installing the additional packages (such as the Software Manager or Synaptic). These packages must be installed prior to GDebi installing the package. Once you have installed the required dependencies via some other means, you are free to install the downloaded package with GDebi. The installation process should only take a few seconds and you'll be shown a dialog box that indicates the installation status.

As mentioned in the previous chapter, the terminal can often be an overwhelming place to end up if you aren't familiar with how it operates. In this chapter we're going to cover 7 simple commands that should get you up and running in regards to software management in the terminal.

Peppermint keeps a list of all available software and the versions of that software from all available sources. It makes sense to update that list periodically so that Peppermint will know to look for new versions of installed software and so that it can be aware of new software that is available. The "apt-get update" command tells Peppermint to refresh this list so that it can take advantage of the most recent software updates and additions. Note that "apt-get update" does not actually install any software, it simply informs the system of what is available.

New versions of software packages are being released all the time. The "apt-get upgrade" command tells the system to download and install any available new versions of software that is already installed on the system. If a new version of a package requires an additional package to be installed, or if it requires an existing package to be removes, "apt-get upgrade" will kindly let you know that the upgrade is being held back. Under no circumstances will it install new packages or remove any existing packages.

This command will perform the same function as "apt-get upgrade" however it will install additional packages that new versions depend on, and it will remove packages that cause conflicts.

Now we get to the fun part. The "apt-get install" command will install any available package by including the package name after the command If you want to install the Leafpad text editor, then type "sudo apt-get install leafpad". If you want to install the Eclipse integrated developer environment, then type "sudo apt-get install eclipse". Applications like Leafpad, which has no additional dependencies, will simply download and install after you enter your password. Applications like Eclipse, which has a lot of dependencies, will prompt you for whether or not you want to install all of the required dependencies before moving forward. Software management from the terminal is generally much more efficient than going through one of the graphical tools. The downside is that you have to know the name of each package you wish to install. 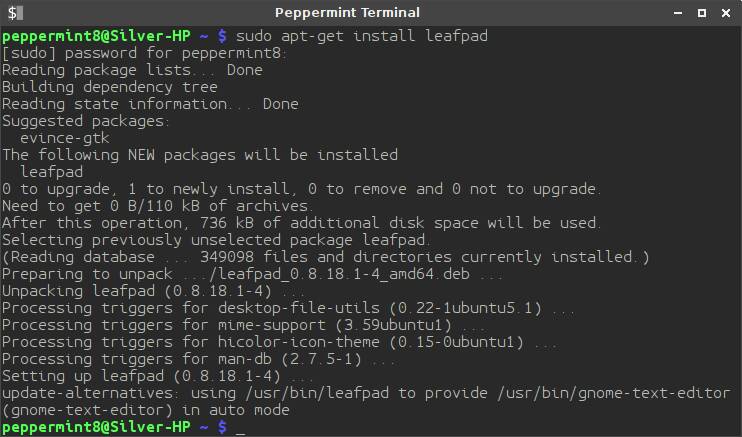 Removing software is just the same as installing it except for one word. Just like with the "apt-get install" command, simply add the name of the application you wish to remove after the "apt-get remove" command and hit "Enter". You may be prompted for your password, then the command will ask you to verify using "y" or "n" and if you select "y" then the application will be removed. Configuration files from the removed application will stay on the system in case you later decide to reinstall the application. There's really not much to it. 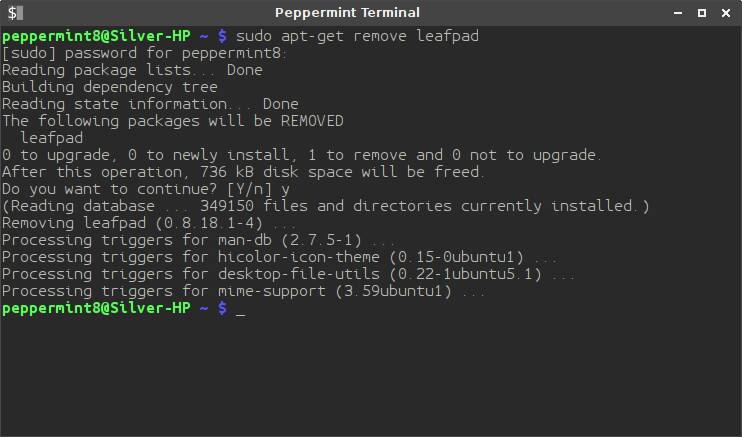 This command is just like "apt-get remove" however it will remove any configuration files associated with the application being removed as well. 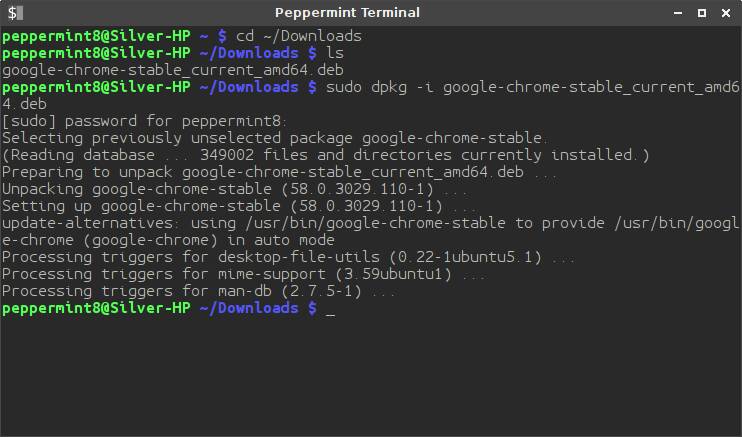 Do note that like GDebi, the "sudo dpkg -i" command does not automatically handle dependencies and will alert you of packages you must install via other means.

To break things down just a little bit, the "sudo" part of the command tells the system to use administrative privileges while running the rest of the command. "dpkg" is actually a very large and very powerful framework for working with Debian software packages in almost any capacity. The "-i" is simply one of the many options in "dpkg", this one meaning that it should install something. Finally we have the full name of the downloaded software package. We can't abbreviate here as is done with the "apt-get" commands as "apt-get" will always refer to either the most current version (when installing or upgrading) or the installed version (when removing. Many people use "dpkg" to work with older versions or experimental versions of software and in these situations typing the exact package name with the exact version number eliminates much confusion. The "dpkg -i" command is not a wrapper and thus is the exact same command you would use in Debian/Ubuntu.

Again, don't worry if you feel a bit overwhelmed with some of the terminal commands. This is why the graphical tools exist. Please check the following for some additional information regarding some of what was discussed here:

Next - Chapter 5 - Site Specific Browsers and the Ice Application